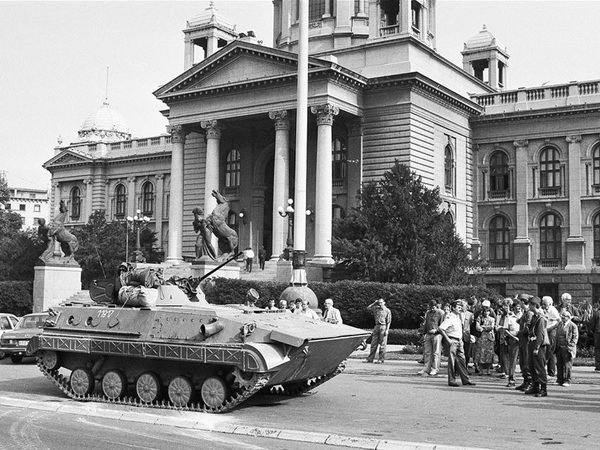 Drafted soldier Vladimir Živković deserted from the Vukovar front and parked his armored vehicle in front of the Parliament building in Belgrade, protesting the war. September, 1991.

Igor Seke is a peace activist from Serbia, currently living in Mexico. From year 2001-2004 he was coordinating the Conscientious Objection campaign in Serbia, together with other Campaign members, mainly coming from the punk and underground music and art scene. Currently, he’s participating in various initiatives in favor of the rights of the indigenous communities in Mexico. He’s a council member of War Resisters’ International (WRI) and also an active member of the Antimilitrist Network of the Latin America and the Caribbean (RAMALC).

Antipolitika: Tell us something about the general characteristics of the anti-war movement of the 90s in Serbia.

Igor Seke: The anti-war movement had many forms. For example, the Civil Alliance of Serbia was a political party that participated in the elections and had clear anti-nationalist and anti-war characteristics, and many intellectuals of the left and social-democratic orientation were members or sympathizers of that movement. In addition to that, in the beginning of the war, a group of rock musicians gathered and made the song  “Slušaj ‘vamo” (“Listen here”) that called for people to boycott the war and calls for mobilization. Women in Black Against the War was also founded, and they openly helped the deserters and conscientious objectors, and they were—in the literal sense—the cradle of the conscientious objection movement in Serbia. Women in Black became members of the global anti-militarist network War Resister’s International (WRI) and through an international network made contact with conscientious objectors movement from Spain (MOC) from which we learned a lot. YUCOM, the committee of lawyers for human rights also joined the struggle for the recognition of the right to conscientious objection, and in cooperation with them a campaign for the collection of 30.000 signatures for a citizens initiative for the recognition of the right to conscientious objection was started. The initiative was rejected by the parliament, but it was the first indicator that things would change.