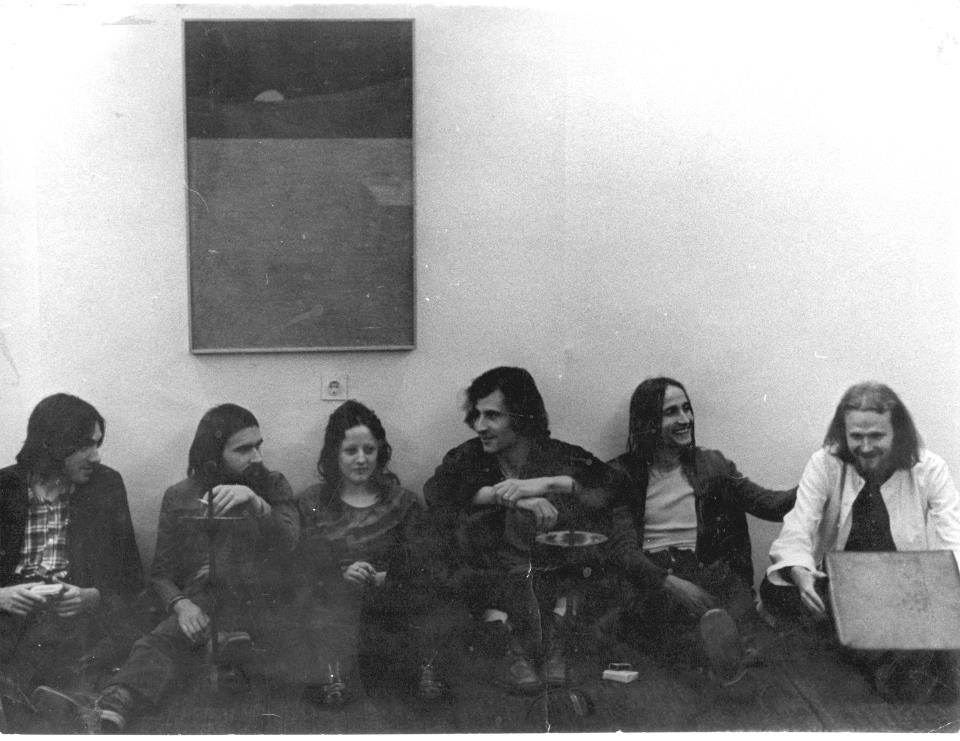 (OR)) AN INTRODUCTION TO SLAVKO BOGDANOVIĆ)

BETWEEN POLITICS AND POETICS

writing must go beyond the dominant or the expected discourse.

the language must be rough and distorted.

the language must be venomous and gentle.

written in off nd, first off all, full of contradictions.

subversion cannot be present at the level of a theme, but has to be conveyed

through different aspects, functions and potentials of language.

a morning descending. the mansard and the whole boulevard tremble with a seismic sound.

obliquing, it comprises a multitude of potential voices.

>>> the melancholy and the secret of the street. the transfiguration of language.

>>> in the beginning there was the formula of the deoxyribonucleic KÔD.

>>> a deafening noise of the buzzing of language,

a roar of an avalanche of signifiers,  an echo of bells or an explosion?

I remember, one time,

told me about slavko bogdanović >>> he is interested in politics and power; these are controversies.

the subject is the object. the active >>> the passive.

the question ’who speaks’

and the structures of power that it models.

however, the range >>> is an illusion, a worldview.

where we expect art, we find politics,

where politics is promised, formalism and radical aestheticism arise.

even if the ‘swampy’ analytical materiality of language erupts on the surface (of language),

not only the deconstruction of the aesthetic but also a step into horror of the political power inside and behind language.

is there anything less dividable in language than the act of dividing, analysis, separation, reduction?

in a tight amplitude of words, across sets of meaning with neW semantic values,

towArds the stage writing ground zero.

the signifier is the stage zero of the text,

a potential terMination of the text and a potential incePtion of all other texts.

>>> the search for the signifier, the writing ground zero, the performative voice and the

culture), actually, the possibility for culture to be erected again, for symbolization to start

from the very beginning.

it is midnight. from the terrace door

>>> din of the break between dream and morning

with the echoes of the traffic, vanishes the fall mist.

I think about the ’open work’.

the work which is completed with its performance by the interpreter or with reception by the spectator.

towards the very process of formation.

open to interventions and additions, a work of art that does not guarantee final solutions for reading,

with hypothetical and changeable suggestions.

>>> his works (artworks, not pieces), because of its multidimensionality and poly-genre

indeterminateness, challenged the ideal of the autonomous modernist artwork, and

through its intertextual nature (according to kristeva and solers, a text exists only

however, bogdanović’s entire opus vibrates inside the amplitudes of poetics and politics.

because of its sidedness, this text in formation is wrong, arbitrary and does not aim at the core.

that is why it is inscribable, in an abundance of a surplus of meaning.

the becoming of a text introduces into marginal distinctions.

obliquing, it comprises a multitude of potential voices.

the habits of reading strive to construct the content even of a text written in fragments.

on a first encounter with nailed books

I asked myself if they represent the symbolic act of the murder of the father.

It is understood, the ‘father’ of culture, the weight of a collective experience, the politics of oppression…

about a spreading of the world of art into life, into one concrete dimension

which sees the text and the readers as accomplices inside the interpretative community,

where the term ‘interpretation’, however, refers to the transformation of the primary text.

following instances: art is revolutionary, which does not mean it is in the service of the

current bureaucratic party apparatus of that time, but in the sense of a transformation of

with inartistic social processes, structures and effects; art creates a new sensibility (a

sense of time as the time of progress and prosperity, freedom); art is built of fragments

of reality which are placed in art as ‘ready-mades’; works of art are symptoms or causes

and a metaphysical sense of existence).

its program, against freedom and progressive thought, in summary,

especially because the fate of future yugoslavia depends on a great extent on the conditions in the ac,

we must be outside of it, on the street, in the revolution,

(not even to speak of a revolutionising of the ac),

>>> a total revolt against order, labour and peace.

>>> a dominant conception of culture did not exist in yugoslavia, and there was also no

significant framework for a coherent and aesthetical thought. a system of theoretical

british culture, like pragmatism and empiricism or greenbergian modernism define

german culture, cannot be singled out. at the end of the sixties and beginning of the

seventies in yugoslavia, marxism (real-socialism and self-management socialism) was

the external framework of the current culture, but it was firstly the state-building

mechanism of authority, and not a spiritual productive context of culture. in these

an eclectic base. a radical questioning of various artistic, existential and political

contents and modes of expression, representation and behaviour appeared as a

moderately modernist superstructure of the interests of the party, and therefore, the

interests of the society. pointing out the effect of the political in art discourses

margins to the centre of culture.

… I do not know how much to insist on the facts related to the prison.

that is a picturesque detail of a personal fate, which is relevant,

but I am, however, not sure it deserves special attention.

It can serve as an illustration of ’hard times’.

>>> the ground beneath us is slightly twisting

(explicitly and implicitly, that is, unknowingly),

which seems to me to be at least of bad taste (marauding).

this kind of fact is put into a context

of some operationalised political interests.

I would never ever want that, because, besides,

in that way, my story and the story of my work would come onto a level

in which hatred is the fuel, and urges those

about whom werner herzog made the movie ’aguirre, the wrath of god’

presenting a modern ship that is taking us into spaces of non- existence.

I do not posses the feeling of hatred.

I think that all things are in their place…

the afternoon. on the horizon, the last black sun on the zenith of the fall.

of a drawing of a black flag  in the index

regarding the black flag: from the chants of moldoror to magnetic fields

in order to  defeat his greatest enemy – the state

be in constant action

I do not know if we can speak of a neo-anarchist destruction of reality.

it is rather a subverted political actionism

which, carried by the spirit of a new sensitivity, strives to implode

inside the fixed conventional norms.

they are rather transgressions

>>> behind the line of the horizon, an incandescent strip of a stake flashes

carrying the smell of smoke into the starry sky

inside / from the illusive spaces of civil (artistic) freedoms.

all the decay coincided with the defeat of utopia.

the defeat of utopia is only possible with the acceptance of defeat!

>>> living on the ruins of an old patriarchal civilisation

>>> images about which he was always told represent the world

>>> in the dump, >>> faced with threats of hard-patriotic messages from all sides >>>

>>> endeavours to dilute the rhetoric

>>> endeavours to relativize the horror

a nuance of difference in relation to interpretation.

>>> behind the line of the horizon,

the alive and the dead are sorted alternately

there is no reading, no writing without struggle.

the symbol is the substance of language. always a replacement. always a pallid notion

of something which is in hands reach, which presents itself by itself, directly.

>>> the problem of the individual in consumption that interests me

is firstly a cultural problem

in no strange land. (in)stability is embodied with an interrupted frame.

I think of the materiality of language, that is, its manifestation.

the text as the politics of narrowing, of minimizing the latitude. and a transgression, to sublimation.

the subject is most often shifted, but like a trace in disappearing, present by being absent.

therefore, presence is not, not even remotely, as it is believed, what the sign means,

not to assent to banal interpretations >>> especially of stigmas

because at the sole mention of prison in the sfry >>> today

in which the story imposes itself >>> like more than adequate

for an illustrated lubrication of discourse >>>

>>> we were interested in the principles on which cultures are based.that is the reason

why this piece (I am not talking about my work, but about the activities of (conceptual

reflected the spirit of the time in which we lived. I believe that we belonged to the global

knew that we know that we are its inhabitants. we were connected to them and,

perfectly consciously and peacefully, we were building a more noble global utopia. on

the other hand, nationalism (it implies that it also refers to other supranational

phenomena – chauvinism, national socialism etc.) has no friends. one nationalism, with

its being, suppresses another nationalism. it preys on its weaknesses. strives to destroy

it. nationalist leaders are actually conductors of the national train to nowhere. the

being. nationalism is always against the ’outside’ and always endlessly for the ’inside’.

Nationalism is against civilizational integralism. etc. is there any sense to absorb

ourselves into this any further? 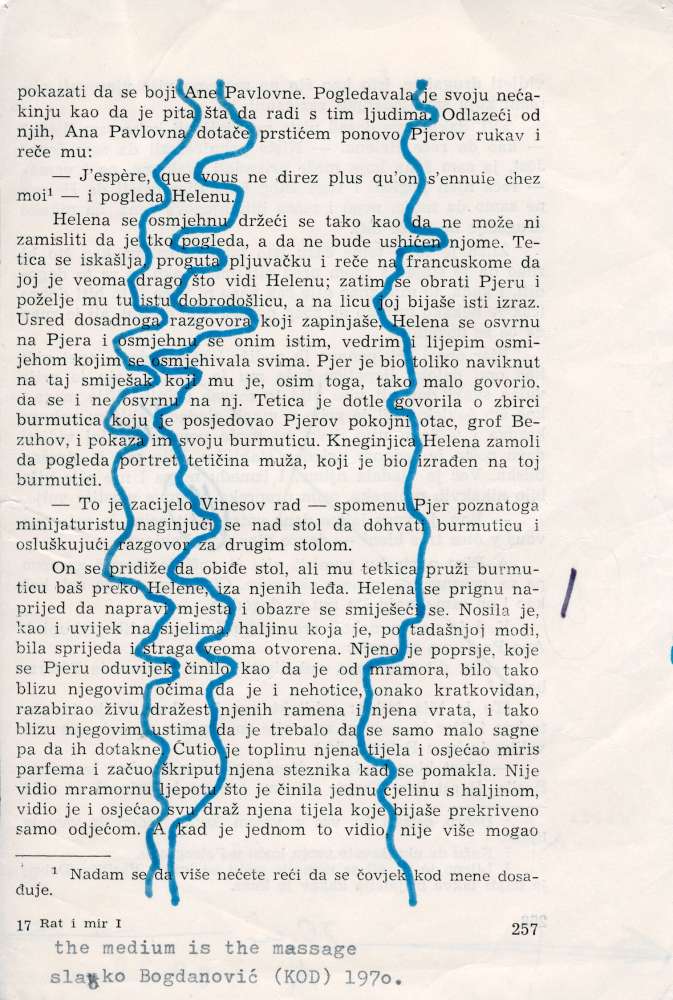 FRAGMENTS OF THE COLLAGE: