His adherence to anarchism seems to date from that period, where in one of his leaflets, he refers to Bakunin. He was arrested, incarcerated and tortured by the Ustashi. During a transfer to Montenegro, he escaped and joined a resistance maquis. Towards the end of the war he crossed the Adriatic with a few comrades and joined the Allied troops in Italy. When the war ended, he was a non-commissioned officer in the RAF.

After the Liberation, Pavle Vrbica refused the honorary posts and positions of power which he was offered by the new communist regime . He soon became a political refugee in Italy, then in France.

Jail and maquis life left their marks on him and he suffered from tuberculosis. For several years, he had to stay in a sanatorium in the Black Forest (Baden-Württemberg). It is only in the early fifties that he was able to come to Paris to study Oriental languages and political science.

At the school of political science, Pavle Vrbica met Roland Breton, who soon became an inseparable friend and with whom he then joined the Fédération anarchiste (FA). In 1952, they formed the group Troisième front (third front) and immediately positioned themselves in the libertarian communist trend of the FA. Until 1954, they contributed many articles to Le Libertaire under a common pseudonym: Paul Rolland.

At the same period, the man who henceforth adopted the name Paul Zorkine (the pseudonym comes from his mother’s maiden name) made two attempts at creating a group of Yugoslavs in exile: a short-lived Fédération anarchiste balkanique, followed by the group Khristo Botev.

The group Troisième front being too small in numbers, Paul Zorkine and Roland Breton then joined the Sacco et Vanzetti group (5th and 6th arrondissements of Paris), one of the pillars of the libertarian communist trend within the FA, which included among others Léo Emery, Serge Ninn and Giliane Berneri. Shortly after, this group renamed itself Kronstadt.

Paul Zorkine was one of the writers of the article “Le vrai sens d’une rencontre” (“the true meaning of an encounter”, 18 September 1952), cowritten with Serge Ninn and Roland Breton. This article was to lead to a break-up between Le Libertaire and the group of surrealists that contributed to it. 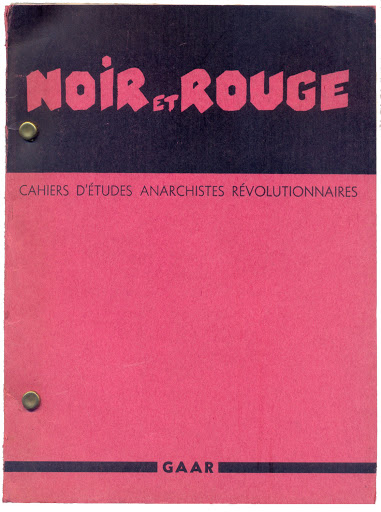 At a meeting in Mâcon on 30-31 October and 1 November 1954, a few groups that disagreed with the national committee of the FCL (Saint-Germain-en-Laye, Mâcon, Kronstadt) created a network, les Groupes anarchistes d’action révolutionnaire (GAAR). In 1955, the GAAR became autonomous and eventually turned into an organization independent from the FCL, In March 1956, they published the first issue of their review, Noir et Rouge.

In line with the FCL, the GAAR supported the Algerian struggle for independence. Upon a request by Guy Bourgeois, from the GAAR, Paul Zorkine supplied the Lyon network led by Jean-Marie Brochier with the necessary equipment to set up a clandestine printing house.

In May 1961, a section of the GAAR — including the Kronstadt group — decided to join the FA recreated by Maurice Joyeux and Aristide Lapeyre and to form within it a libertarian communist trend called Union des groupes anarchistes communistes (UGAC). Paul Zorkine and his comrade Henri Kléber then took part, on behalf of the UGAC, in the editorial board of Le Monde libertaire, where they clashed with Maurice Joyeux in particular. The UGAC’s attempt to place libertarian communism once again at the heart of anarchism was on the whole a failure.

In 1955 Paul Zorkine had married Jacqueline Caresmel, with whom he had two children. He died in July 1962 in a car accident. Roland Breton wrote about him: “He was a Mediterranean more than a Slav. Always dressed up to the nines. […] He had a great sense of humour, was very observant, critical. […] Before all he was a man of the word. He could charm with his speech which, together with his presence, one couldn’t ignore.”